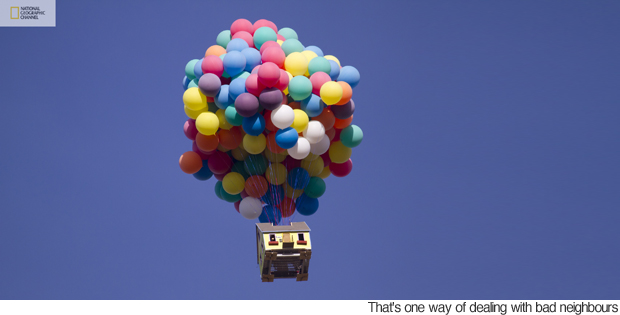 Lifting a house off the ground with balloons looked easy in the animated hit movie Up — but it took a team of scientists and engineers to achieve it in real life.

This weekend the scientists and engineers, along with two world-class balloon pilots gathered at a airfield east of Los Angeles in a bid to recreate the iconic scene from the movie.

A lightweight 16 x 16ft ‘house’ was built and then attached to 300 coloured weather balloons making the experimental aircraft more than the equivilant of a 10 story building.

Filmed for the National Geographic Channel the ballon house was then taken to an altitude of over 10,000 feet and flew for approximately one hour. Carl Frederickson would be proud.

The stunt – a new world record for the largest balloon cluster flight ever attempted – was part of a new National Geographic Channel series called ‘How Hard Can It Be?’ which will air later this year.