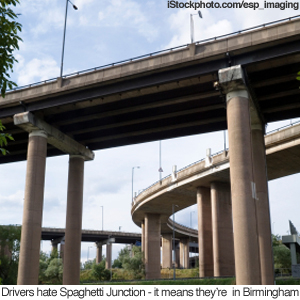 Birmingham’s Spaghetti Junction has been named the most intimidating road system in Britain.

A poll of drivers quizzed them about which intersections they found the most hair-raising – and which ones they tried to avoid.

While the second cities concrete mass topped the list it was followed by the M8 junctions through central Glasgow and Marble Arch in London.

It was also found that eight percent of motorists would even take a longer route to avoid having to negotiate complicated junctions – driving on average an extra 238 miles a year on detours.

In odd news, two percent of drivers even admitted they had such a problem with ALL right turns they only ever go left a junction – but they are just going in circles.

A spokesperson for Britannia Rescue, which commissioned the study, said: “All drivers have to deal with particularly hairy intersections from time to time.

“But what this research shows is that badly designed and confusing junctions are spoiling the driving experience for many motorists.

Drivers also identified specific features of urban roads which are confusing and have a negative impact on their driving. Large roundabouts are considered the most problematic (by 30% of drivers), followed by one way systems (14%), speed humps (11%), cameras (9%) and box junctions (7%).