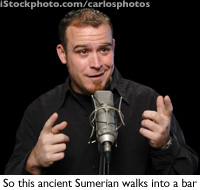 There is nothing new about laughing at fart jokes, academics say the first one was told in 1900 BC.

Researchers have found what is thought to be the earliest joke – but maybe you had to be there to find it funny.

“Something which has never occurred since time immemorial – a young woman did not fart in her husband’s lap.”

Okay I’ll continue because I assume you are not rolling around on the floor in fits of laughter and that your sides are intact.

Dr Paul McDonald of the Uiniversity of Wolverhampton who conducted the research said: “Jokes have varied over the years, with some taking the question and answer format while others are witty proverbs or riddles.

“What they all share however, is a willingness to deal with taboos and a degree of rebellion.

“Modern puns, Essex girl jokes and toilet humour can all be traced back to the very earliest jokes identified in this research.”

2 How do you entertain a bored pharaoh? You sail a boatload of young women dressed only in fishing nets down the Nile and urge the pharaoh to go catch a fish (An abridged version first found in 1600 BC on the Westcar Papryus)

4 A woman who was blind in one eye has been married to a man for 20 years. When he found another woman he said to her, “I shall divorce you because you are said to be blind in one eye.” And she answered him: “Have you just discovered that after 20 years of marriage!?” (Egyptian circa 1100 BC)

5 Odysseus tells the Cyclops that his real name is nobody. When Odysseus instructs his men to attack the Cyclops, the Cyclops shouts: “Help, nobody is attacking me!” No one comes to help. (Homer. The Odyssey 800 BC)

6 Question: What animal walks on four feet in the morning, two at noon and three at evening? Answer: Man. He goes on all fours as a baby, on two feet as a man and uses a cane in old age (Appears in Oedipus Tyrannus and first performed in 429 BC)

7 Man is even more eager to copulate than a donkey – his purse is what restrains him (Egyptian, Ptolemaic Period 304 BC – 30 BC)

8 Augustus was touring his Empire and noticed a man in the crowd who bore a striking resemblance to himself. Intrigued he asked: “Was your mother at one time in service at the Palace?” “No your Highness,” he replied, “but my father was.” (Credited to the Emporer Augustus 63 BC – 29 AD)

9 Wishing to teach his donkey not to eat, a pedant did not offer him any food. When the donkey died of hunger, he said “I’ve had a great loss. Just when he had learned not to eat, he died.” (Dated to the Philogelos 4th /5th Century AD)

10  Asked by the court barber how he wanted his hair cut, the king replied: “In silence.” (Collected in the Philogelos or “Laughter-Lover” the oldest extant jest book and compiled in the 4th/5th Century AD)

Steve North, of TV station Dave, which commissioned the research added: “What is interesting about these ancient jokes is that they feature the same old stand up comedy subjects: relationships, toilet humour and sex jokes.

“The delivery may be different, but the subject matter hasn’t changed a bit.”