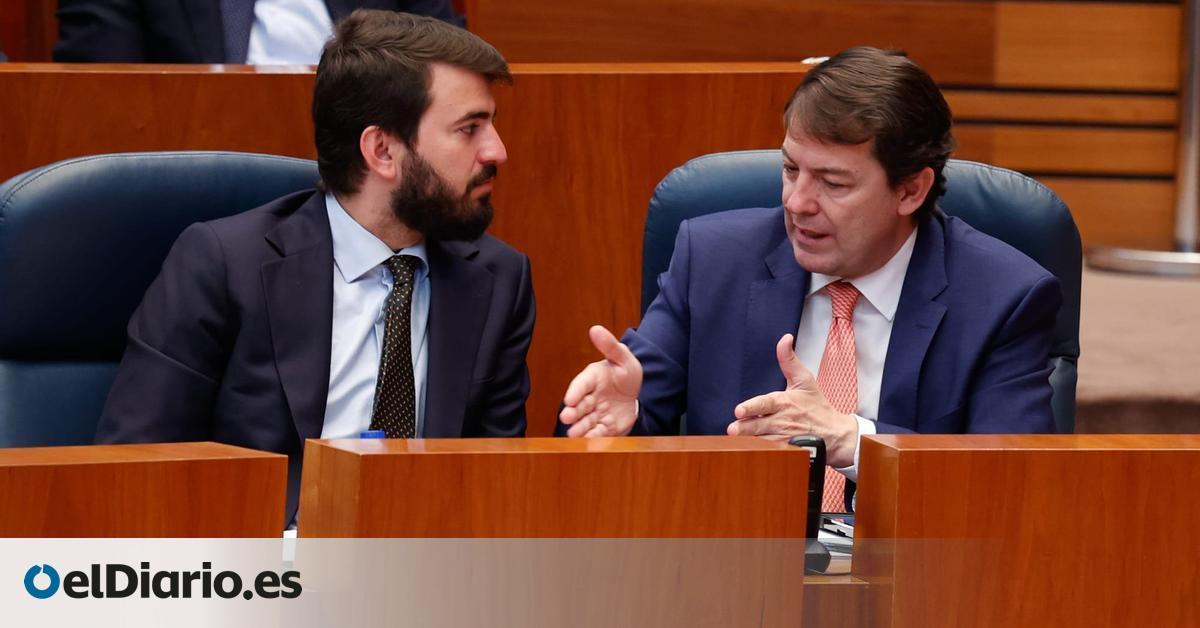 The president of the Junta de Castilla y León, Alfonso Fernández Mañueco, spoke this Saturday, for the first time, about the anti-abortion measures that Vox imposes on the women of Castilla y León and that has generated several clarifications and denials from the Ministry of Health about your application. Manueco, in statements before the act of presentation of candidates in Zaragoza, has tried not to disavow his government partner, making balances that have led him to say one thing and the opposite. “I do not accept lessons from the left when it comes to women’s rights in Castilla y León we defend women, we guarantee all their rights and women’s freedom of choice”, he stressed.

The president of the Board has started by explaining that his government has been applying “measures to promote the birth” for “months or years” and has listed tax reductions for large families or free school supplies. “We also want to put health care measures to promote the birth rate, which are what we have tried to explain in recent days,” he said. Thus, it has specified that the measures will be applied on “premises”, such as “absolute freedom of choice for pregnant women”, “absolute” respect for their rights, absolute respect for the rights of health professionals and incorporation of the measures ” from voluntary” for pregnant women who need it and the application under medical criteria “respecting the law and the recommendations of the Gynecology Society”.

Manueco has specified that when a gynecologist considers that the woman needs psychological support, he can refer her directly without the pregnant woman having to go to Primary Care for that referral, “to be more agile in the provision of services.” Regarding 4D ultrasounds, which according to Vox are going to be offered to all pregnant women “so that they can see the face of the fetus” and which, according to the Society of Gynecology and Obstetrics, are only indicated to confirm or rule out malformations in the fetus, Mañueco said that at the moment in Castilla y León there are two hospitals that do not have this type of equipment, Ávila and Segovia, and that they want it to be done in all the provinces “with respect and the absolute freedom of the pregnant woman if they request it” and “under strict medical criteria” because “if it is considered dangerous for the woman or for the fetus, that will not be done.”

He does not disavow García-Gallardo: “I am not the one who has to analyze the words or the intentionality”

The president of Castilla y León has not wanted to overrule the vice president, Juan García-Gallardo. “I am not going to go into what he said or did not say because I am not the one who has to analyze anyone’s words or intentions. What I say is what there is, and this is what is going to happen, what the Government of Castilla y León and the Ministry of Health are going to do”. In addition, he added that “beyond the interpretations that each one can make” and beyond the “explanations” that journalists make “in the exercise of their freedom of expression”, the facts are “absolute freedom of women to to choose, absolute respect for pregnant women, absolute respect for the rights of health workers” and that the Board wants to “expedite the provision of services”.

On listening to the fetal heartbeat to women who want to abort: “I deny the greatest”

Regarding the offer to listen to the fetal heartbeat to women who want an abortion, something that García Gallardo explained at the press conference in which he described the abortion data in Castilla y León as “chilling”, Mañueco has said that he “denies the greatest” because the measures “are not about that, they are about promoting the birth rate and the woman who requests it, if she is pregnant, will be able to listen to it. The woman has to request it and there must also be a situation of medical criteria, because below the 12th week the Society of Gynecology and Obstetrics does not recommend it.

Sánchez warns that he will not allow setbacks

For his part, the President of the Government, Secretary General of the PSOE, Pedro Sánchez, has warned that he will not allow setbacks in the right of women to abort and has censured that the PP follow the path “that Vox marks” for it, such as His trial has been made clear by the anti-abortion measures that the Government made up of “the coalition of fear” of both parties in Castilla y León has implemented.

“The right decides which path to take and what is clear is that, after what we have known in Castilla y León, the right knows which path it has taken and it is the one that the ultra-right marks for it,” Sánchez lamented in an act of the PSOE in Seville.

Faced with these anti-abortion measures, the President of the Government has ratified the “total and definitive” commitment of the Executive with women and will not allow “there to be a setback in the right of women to freely decide when to be mothers or not.”