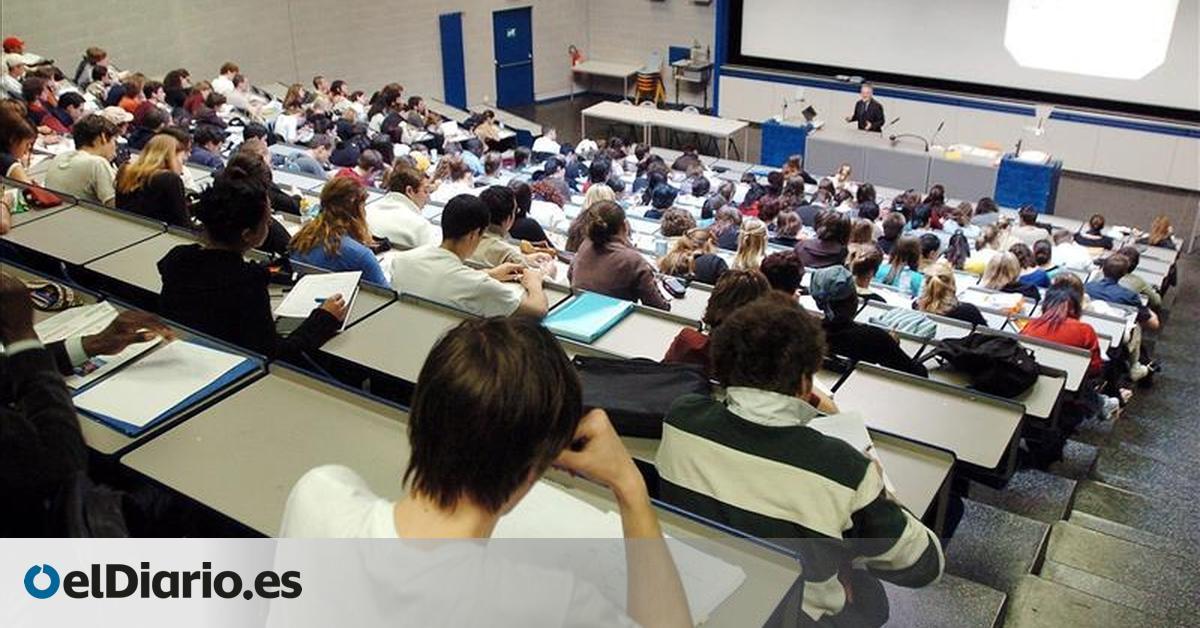 The scholarship system in Spain is ineffective. The aid policy for studying at the University, as it is designed right now, leaves families below the poverty line out of the maximum aid and also causes, together with the variability of prices between autonomous communities, that the effort that households make to pay the rates varies between regions, according to the study The policy of scholarships and public prices in the Spanish university system, is it really effective?by professors Mónica Martí and Carmen Ródenas, from the University of Alicante.

Is meritocracy the parents? How the education system fails the lower classes versus the upper classes

In addition, the authors explain, the fact that the scholarships that have an economic contribution beyond the tuition payment are practically linear, with small variances based on income and/or academic performance, causes dysfunctions. It also happens that due to their “low” amount, the researchers maintain, they force the scholarship holders “to dedicate part of their time to doing paid work with which to supplement their income, so that it is no longer possible to speak of equal conditions and opportunities”.

Finally, the study concludes that the great variability of the prices of public universities between autonomous communities, not necessarily linked to income, means that the effort that households have to make to pay for higher education can double for a family from Madrid than for a Galician.

From an academic standpoint, the scholarship issue has an impact beyond the obvious. It exceeds mere initial access to studies. Two combined ideas explain why scholarships are given, or should be given, to the underprivileged.

Álvaro Choi de Mendizábal, professor of Economics at the University of Barcelona (UB), explains the first: “The student’s socioeconomic level determines their academic performance. This causality has been firmly established, regardless of the methodology, definition of socioeconomic level and the databases used (general diagnostic evaluations, regional evaluations and international programs such as PISA) ”, he maintains in the report. Socioeconomic inequalities and academic performance in Spainprepared by the La Caixa Foundation Observatory.

Mauro Mediavilla, professor of the Department of Applied Economics at the University of Valencia, completes the reasoning with various investigations derived from his doctoral thesis, such as those included in the study Are the scholarships in Spain effective? An impact evaluation for the post-compulsory secondary level. Scholarships improve the options of students without resources at various levels, the text maintains: they improve the chances of simply not dropping out and getting better grades or they give 40% more options to complete post-compulsory training.

The state university scholarship policy – ​​the study explains that the regional ones have not been used because they represent a very small part of the system – contemplates different aids based on income and is adjusted according to the members of the households. To illustrate the examples we will talk about a family of three members.

In general, there are three levels of aid. If the household income is below threshold 3 (the highest, set at 32,697 euros per year, according to the Ministry of Education portal), it is possible to obtain a tuition waiver and an endowment between €50 and €125 linked to the academic excellence. If it is below threshold 2 (the average, with a maximum income of 30,668 euros) the applicant can also receive a variable amount that results from the weighting of the average grade of his file and his family income (minimum 60 €), and in case of needing to reside far from the family home, a fixed amount of €1,600 is assigned. Finally, if the household income does not reach threshold 1 (the lowest, €16,843 per family), the administration adds a fixed amount to the tuition compensation, which in the 2020/21 academic year is €1,700.

The problem detected by the study is that these thresholds are not very well adjusted, especially at the bottom. “Threshold 1 is always below the limit established to consider a household at risk of poverty, specifically, more than 13%,” the study describes. This means that there is a range of income in which the economic amount that complements the tuition payment is not charged. Too much income to receive maximum aid, in the opinion of the administration, but officially below the poverty line.

The professors believe that to correct this situation “the minimum would be to raise threshold 1 and place it at least at the level of the poverty line, so that any student residing in a household at risk of poverty is at least entitled to this aid” , they explain. But with this solution it is not enough to make a fairer or more efficient system. “The sufficiency of the amount of the aid and its good management are also fundamental. A higher threshold could be ineffective if it is not completed with more substantial aid”, they add.

An issue that has caught the attention of teachers and that leads them to conclude that the system does not work as it should is a double circumstance: on the one hand, that there is a relationship between income and the percentage of university students; on the other, that the same relationship does not exist between income level, in this case below, and the percentage of scholarship students (there are no more scholarship recipients among the humblest families).

Regarding the first, if the young population is divided into deciles according to household income (ten groups of the same size ordered according to income), it is observed that the more income, the more people go to university. The richest decile in Spain is close to 80% of university students, a figure that is gradually falling to 30% for the poorest. “If university policy measures to promote equity were really effective, the number of students who attend and complete university education should be independent of the economic level of their homes. However, this is not the case in Spain”, the study maintains.

The second aspect is specified in that, although the five richest deciles do receive less aid (between 25% and 8%, depending on the group), from there the percentages stagnate and in fact the poorest decile receives less scholarships (35% of families have one) than the next four (which are close to 40%), that is, they receive less public aid than the four higher income levels.

“The percentage of beneficiaries does not increase appreciably as income decreases, even though the volume of funds allocated to scholarships whose award depends on household income represents almost the entire set of all types of existing scholarships and aid in the Spanish system”, the authors are surprised, who conclude: “The established measures are not fully complying with the objective pursued. And not necessarily for lack of resources. Spain has spending per student in relation to GDP somewhat below the OECD average (1.42%) but identical (1.25%) to that of the EU-23 (OECD, 2020). It is then necessary to look at the design of the applied measures”, they deduce.

Finally, the study highlights “the insufficiency of the economic endowments of these aids.” With average annual allocations of 2,550.40 euros (for threshold 1) and 1,050.40 euros (for threshold 2), which were those that were granted in the 2017/2018 academic year, it is not possible to cover “all the costs that it entails the decision to continue studying a degree”, maintain Martí and Ródenas. These amounts represent 29.7% (threshold 1) and 12.2% (threshold 2) of the minimum monthly interprofessional salary established for the year 2018. of their time to do paid work with which to supplement their income, so we can no longer talk about equal conditions and opportunities”, the teachers maintain.

Martí and Ródenas have also studied, to assess its equity, the university system, the establishment of centers in Spain and the prices set by the autonomous communities. Regarding access, the authors explain that Spain chose to bring universities to students instead of going the other way, and thanks to this the country has a sufficiently wide network of public university campuses that guarantees, to a notable percentage of the young population, accessibility and proximity to higher education services.

Less optimistic is the panorama regarding the equality of public prices. The study recalls that despite the fact that a reduction in public prices is currently underway in many communities for the sake of a certain harmonization, “the differences continue to be substantial”. An example: the cost of enrollment for a full academic year (60 credits) ranges from 706.80 euros in Galicia to 1,390.20 euros in the Community of Madrid, which means that studying in Madrid costs 97% more. than in Galicia. And these differences are not explained by income, argue the authors, who have crossed the price of public rates with the income of the different communities.

“The increase in the average price of credit is also associated with a greater relative economic effort in households. In this sense, Catalonia leads the highest level of pressure, which represents 5.8% of its median income, followed by Madrid with 5.7%. While, at the opposite extreme, they are the Galician families in which university enrollment weighs less in the median of their income, with a percentage of 3.4% ”, they describe. On this specific issue, however, the nuance is added that “with respect to Catalonia, it should be noted that since the 2012/13 academic year, this effort has been mitigated through the so-called equity grants, which ultimately translate into applying differentiated prices for household income level.

The authors believe that with resources that cover the needs of households with lower incomes, the State should give a change to the system, which currently finances a large part of the tuition for everyone who enters a university, regardless of income (the The price of the public tax covers approximately 25% of the real cost of the studies). “It is inappropriate to subsidize all households linearly regardless of their income level. It would be convenient to modulate the cost of enrollment according to household income; at least, for the highest income levels”, they reflect.