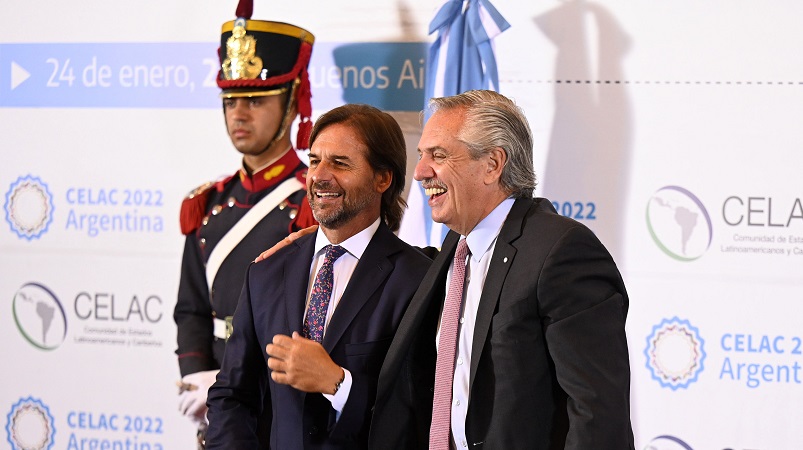 This Tuesday, at the hotel Sheraton of Buenos Aires, the Argentine president Alberto Fernandez formally inaugurated the VII Summit of the Community of Latin American and Caribbean States (Celac). He did so before representatives of the 33 States that make up the regional grouping and with a speech in which sought to polarize with the Latin American ultra-right. This is Fernández’s last intervention as President for the time being of Celac, a position he held for a year.

In his speech, the president focused on the recent actions of the most reactionary sectors of the region, taking as examples “the coup in Bolivia” of 2019, “the madness in the streets of Brasilia a week after Lula took office” and the assassination attempt suffered by his vice president, Cristina Fernandez de Kirchner.

“We believe in democracy and democracy is definitely at risk,” Fernández said. And he added that “after the pandemic we have seen ultra-right sectors that have stood up y They are threatening each of our peoplesWe cannot allow that recalcitrant and fascist right wing to put the security of our peoples at risk.”

In that tone, he called “defend democracy and institutions”. In turn, he asked for applause for Brazil, which after taking office Lula da Silva in the presidency he returned to Celac after years of absence decided by Jair Bolsonaro. “Now we are with a complete Celac, with Brazil, and the opportunity to unite the region is an imperative that is imposed on us and we have to achieve it,” said the Argentine president.

Self-promoting his tenure as president pro tempore, Fernández said he felt that he had brought “the voice of Latin America to all corners of the world.” He claimed to have “the peace of mind of having told the north that while missiles are flying in the north, in the south hunger deepens”. And he recalled the demand expressed at the last Summit of the Americas, held in the United States, to achieve “The end of the blockades that Latin American countries still suffer from” like Cuba and Venezuela.

Regarding the “hunger” in Latin America, the president sentenced: “We live on the continent (he must have meant the subcontinent, NdR) most unequal in the world”. But he didn’t do it in key MEA culpa or self-criticism, despite the fact that in the case of Argentina its political space governed three of the last four decadescon looting and adjustment policies agreed with the imperialist powers that subjugate the region.

In this sense, it must be said that the popular dissatisfaction with the “democracies” in Latin America, about which the right-wing populisms that Alberto Fernández denounces make demagogy, has its origin to a large extent in the demands of millions of people repeatedly dissatisfied. In this framework, the brutal adjustments to the living conditions of the masses (such as the one carried out by the Frente de Todos), the subordination to the IMF and other policies do nothing more than fuel this discontent. Hence, confronting the right, the extreme right and the coup plotters goes the other way.

The most curious thing about Alberto Fernández’s speech is that in front of him he had the official delegation of Peruheaded by the Minister of Foreign Affairs, Ana Cecilia Gervasi. The official participates in direct representation of In Boluartewho was “awarded” with the position of president after the coup executed against Pedro Castillo and today he commands the brutal repression against the mobilized populationwith a partial balance of more than 60 people dead by police bullets.

Boluarte did not travel to Argentina. On the one hand, he preferred not to leave the country in the midst of the crisis and the massive protests. On the other, in order to leave Peru as president, she would have to have authorization from Congress, which would not be feasible in these circumstances.

In his opening speech at the Celac Summit, Alberto Fernández directly preferred not to talk about the situation in Peru. According to “a high diplomatic source” consulted by Argentinian timein the final document that will be agreed upon by all the participating countries, “the priority is Brazil” and “until now it is not clear how to approach the Peru case”. At the moment, the official discourse (expressed, for example, in the cables of the state agency telam) instead of a coup d’état, he speaks of “political turmoil” after “the removal of former president” Castillo.

From Lima, while closely following the repression of the demonstrations (which, in addition to dozens of deaths, already accounts for almost 700 detainees), Boluarte thanks and appreciates the efforts of Fernández, Lula, Boric and other presidents Latin Americans for hiding the anti-democratic outpost in Peru.

The complicity and the silence about what is happening in Peru, both the Argentine government and the right-wing opposition (as in other issues of high bourgeois interest, there is no “crack” here), will be denounced this Tuesday in front of the hotel Sheraton in a demonstration called by the Left Front and Workers Unity (FITU)under the slogans “All my support for the struggle of the Peruvian people”, “enough of repression”, “Down with the regime and the illegitimate government of Boluarte”, “Free and Sovereign Constituent Assembly” y “no recognition of the coup government of Boluarte”.