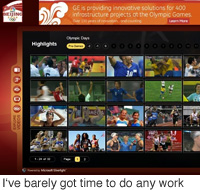 One in ten office workers will watch some of the Beijing 2008 Olympics while they are at work, according to a recent survey.

Younger workers have the most interest in watching the games while on the clock with sixteen percent of workers aged 18-24 say they will catch some part of the Olympics while working.

Coverage of the games is available on a host of websites, some more legal than others, and they are expected to be a huge productivity problem for businesses.

The survey of over 7,000 people also asked in which of the Summer Olympic sports they would most want to compete and win a gold medal, with swimming coming first.

Which event people wan to compete in: