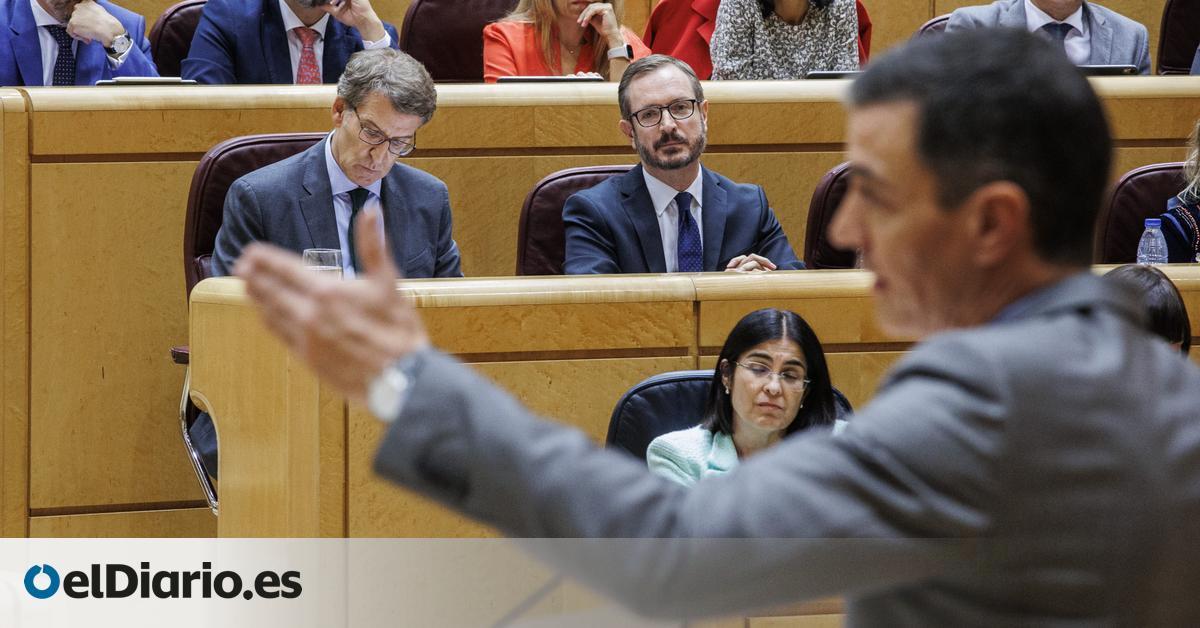 It happened in Murcia with the parental pin, it has happened in Castilla y León with the abortion and it can happen again at any time. The government is extremely vigilant about the implementation of the ultra-right political agenda where its pacts with the Popular Party allow it to have the power to deploy its road map of setbacks.

After giving the response to its request by the government of Alfonso Fernández Mañueco as good this Friday, the central Executive now promises to remain vigilant not only to wage the political battle but, as has happened with Castilla y León this week, to even reach the legal clash between administrations. The message that Moncloa sends is that it will not stop “protecting the rights of all, wherever they live”. In the background, the political strategy involves portraying the contradictions of Alberto Núñez Feijóo’s PP.

“Feijóo is not a leader, Feijóo is a hostage to Vox,” the PSOE spokeswoman, Pilar Alegría, cried out on Monday, in the face of the opposition leader’s silence regarding the anti-abortion measures announced by his partner in Castilla y León. The president of the PP allowed six days to pass before ruling against a protocol that proposed that women determined to exercise their right to terminate a pregnancy be offered compulsorily by health personnel to listen to the heartbeat of the fetus beforehand or have access to a 4D ultrasound. The central government did not let that much time pass: 72 hours after the announcement by the vice president of the Board, Moncloa hastened to make a move.

“The Government of Spain will use all the mechanisms that the legal system makes available to it to defend the freedom of women and their right to voluntarily terminate a pregnancy under the terms established in current regulations,” the Government said in a statement. The Executive promised to “ensure that no actions are carried out that impair their fundamental rights under any circumstances, nor in any territory of the State, nor by any Public Administration.” And he added: “The ministries of Health, Territorial Policy, Finance and Public Function and the Presidency are in permanent coordination to study, establish and coordinate the pertinent measures.”

While PP and Vox were engaged in a ceremony of confusion with contradictory versions about the level of concretion of this anti-abortion protocol and with veiled threats to break the autonomous government, the socialist wing of the central Executive came out in a rush to warn of the risk to rights of the women that supposed the so-called “coalition of fear” by Pedro Sánchez himself.

“These are ideological setbacks from which neither the PP nor Mr. Feijoó have departed,” said Minister Isabel Rodríguez. The Minister of the Presidency, Félix Bolaños, went so far as to describe the announced protocol as a set of measures “clearly attacking women” and asked in an interview on Telecinco “that the right-wing and the far-right agree to see what they are going to do.” to do exactly, because if they are going to start it up and implement it, we are going to go to court and we are going to go to the Constitutional Court because it affects competences”.

From Ferraz, the spokesperson and Minister of Education Pilar Alegría also pointed out the threat posed to the future of women’s rights that Feijóo is not able to prevail over those of Santiago Abascal. “We are talking about curtailing women’s rights, generating a climate in which women are singled out, generating an environment of guilt for women who can freely decide about their lives. And the time has come when we have to say that enough is enough, because this could be the prologue” to what could happen in Spain if the PP and Vox govern tomorrow,” Alegría assured before insisting on a notice that had already been issued at other times in the legislature for the PSOE: “The PP has its natural partner in Vox and it needs it to govern”.

That strategy of fear of Vox was definitively banished on Ferraz street after the resounding failure of the Andalusian elections. The conclusion is that this threat from the ultra-right had stopped operating as a mobilizer of the progressive electorate. It was even reasoned that, far from adding votes, it could contribute to the conservative voter once again rallying around the initials of the PP, as happened in the case of Juanma Moreno in Andalusia.

However, both in Moncloa and in the PSOE understand that there are red lines that have to do with the implementation of the ideological roadmap of the extreme right in matters such as education or equality that they cannot ignore. Above all, if they arrive to cover other political problems of the first magnitude for the Government, such as the case of the application of the law of the only yes is yes. Just what happened this week.

The socialist wing of the Executive has been concerned for weeks about the electoral attrition that they have already verified is generated among their own voters by the incessant trickle of cases of sex offenders who are benefiting from reduced sentences thanks to the application of the law. An issue that worries more in the face of the electoral year even than the possible wear and tear that the application of other measures related to Catalonia may have, such as the case of embezzlement.

From now on, the PSOE’s idea is not so much to influence this failed strategy of fear of Vox but to portray Feijóo for his pacts with the extreme right. “Neither a leader, nor a moderate, nor a good manager”, they maintain in Moncloa, advancing the script of the socialist staging that is to come during the pre-campaign months and that Pedro Sánchez will personally deploy again within a week in a new face to face with the leader of the PP that the Socialists have forced into the Senate.

The value of journalism

elDiario.es is financed by the contributions of 60,000 members who support us. Thanks to them, we can write articles like this one and that all readers – including those who cannot pay – have access to our information. But we ask you to think for a moment about our situation. Unlike other media, we do not shut down our journalism. And that makes it much more difficult for us than for other media to convince readers of the need to pay.

If you get information from elDiario.es and you believe that our journalism is important, and that it is worthwhile for it to exist and reach as many people as possible, support us. Because our work is necessary, and because elDiario.es needs it. Become a member, become a member, of elDiario.es.