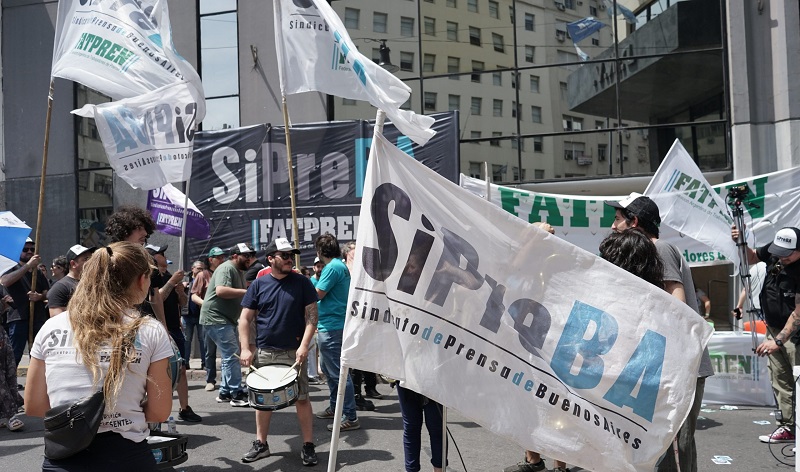 This Monday, through the Resolution 21/2023 published in the Official Gazette, the Ministry of Labour, Employment and Social Security announced the granting of trade union status al Press Union of Buenos Aires (Sipreba)which empowers that organization to “group workers in a dependency relationship with employers of the press activity that provide tasks included in the statute of professional journalist and in the statute of administrative employees of journalistic companies, with area of ​​operation throughout the territory that includes the Autonomous City of Buenos Aires”.

Among other relevant tasks for the workers of the union, the Sipreba will be from now on the trade union organization in charge of negotiating parity with the employers’ chambers and the State.

In this way, as stated in the same ministerial resolution, the Union of Press Workers of Buenos Aires, the historic Utpba, is excluded “from the personal and territorial scope”, “which will remain as merely registered with respect to the scope granted” to Sipreba. The news was very well received among combative sectors of the working class and the left.

Congratulations to the compañeras and compañeros of the Buenos Aires press union, @sipreba, who conquered union status after years of struggle and organization. bye @UTPBA1.

Congratulations @sipreba for achieving the deserved recognition of the trade union.
A great collective work 👏🏽

After several years of betrayals by the successive leaders of the Utpba (which turned the union into one of the most precarious, flexible and with low wages), in 2015 Sipreba was born after getting the “union registration” at the Ministry of Labour. It was after a massive referendum held a year earlier in which more than two thousand workers had spoken in favor of the formation of a new union.

In 2020 Sipreba requested the Ministry the “trade union”, seeking to take a new formal step in the legitimate representation of thousands of radio workers, TV channels, newspapers, magazines, portals and other media. Almost three years later and the attempts of the leadership of the Utpba to avoid the fall failed, the labor portfolio was forced to recognize Sipreba the majority representation of the union.

The Ministry’s resolution recalls that on October 31, 2022, a hearing was held so that both Sipreba and Utpba (and other unions such as ATE, UPCN and Sitrapren) “carry out the comparison of representativeness and mutual control that assists them.” There, the documentation presented by the Utpba “It was not suitable to prove the entity’s contributing affiliation, since the accompanying receipts do not meet the formal requirements and the files do not allow establishing whether the affiliate had the status of ‘contributing affiliate’, as required by law”. The Utpba was also unable to present “Affiliate Registration books or Affiliate Contribution Registration signed.” And how Sipreba did “certify contributory affiliation with respect to workers” and other documentation required, the cards were cast.

Congratulations to all the companions of the @sipreba for this conquest! https://t.co/pvUcv3A3O0

As soon as Resolution 21/2023 was published in the Official Gazette, it circulated through groups of WathApp of workers and press workers a message of Paula SabatesSecretary of Culture and Youth of Sipreba: “Comrades, we share with you the best news. Today the Ministry of Labor granted SiPreBA the union legal status that, among other things, will allow us to negotiate parities. As we told in the meetings we held, until now another union had that power, which at the time was representative and years ago lost its real representation in the media. It is great, historic news, and it gives us many challenges going forward. Good things are coming and youth is going to be a key part. Congratulations to all!”.

we founded @sipreba in 2015 due to the need to have a union that defends us. After a big fight today, the Ministry of Labor granted him union status. stamp is over @UTPBA1 that destroyed wages and allowed terrible conditions. It was the collective fight. Endurance

Important news for journalists and media in Buenos Aires: the @sipreba achieved union status and adds legality to the legitimacy built since its creation 👇🏼https://t.co/Yq5jAeaBdm https://t.co/ksZRgeV7ej

The best news of the year for press workers! After years of struggle and collective effort @sipreba will be representing us at the parity table! ✊✊ pic.twitter.com/APiykOvVTi

We want to greet our colleagues and colleagues @sipreba that achieved legal status in the City of Buenos Aires. Goodbye to the rubber stamp of the UTPBA, ​​functional to companies. A great achievement product of the enormous and tireless struggle of the workers. Congratulations!

We build unity and organization.
We believe in participation and commitment.
The press workers of Telefe Noticias celebrate that the @sipreba has been recognized with trade union status. pic.twitter.com/cSCH5todEg

For seven years we have been pursuing this that today, January 23, 2023, became a reality: @siprebaour union, obtained union status and ousted the @UTPBA1the rubber stamp that pulverized our wages.
Now join and help us rebuild our industry! pic.twitter.com/4fMDloAXTD


If you are from the City of Buenos Aires: Get in touch and get organized with the PTS in the Left Front or with Pan y Rosas in your work, place of study or neighborhood.