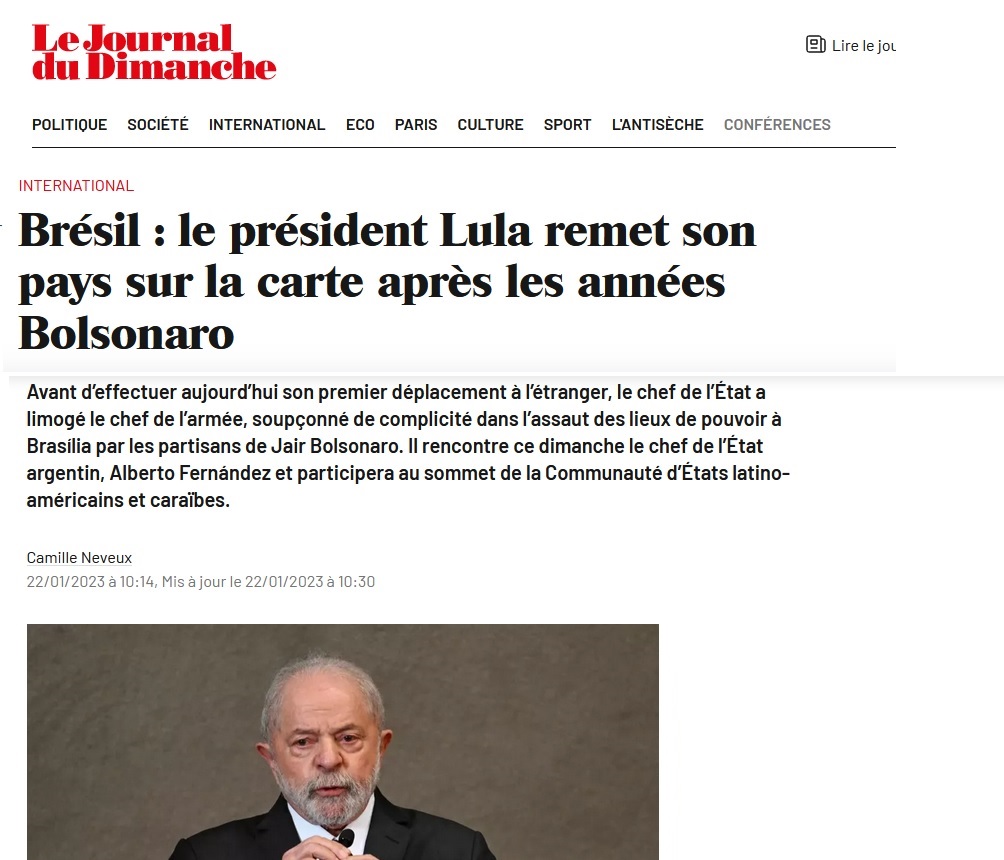 Brazil’s position in the world is observed internationally. “Brazil: President Lula puts Brazil back on the map after the Bolsonaro years”, says the Journal du Dimanche, France’s main weekly newspaper.

“By choosing to fly this Sunday to Buenos Aires to meet the Argentine head of state, Alberto Fernández, Lula wanted to respect the tradition that establishes the first visit of the Brazilian president to his great neighbor”.

“But not only. The Peronist leader is a friend and faithful ally, which will not be for nothing to seal the return of Brazil on the international scene, shaken by four years of populism and an attempted coup d’état a fortnight ago”, he analyzes.

“The leader of the Workers’ Party is going to take advantage of his trip to participate in the Summit of the Community of Latin American States (Celac), which he co-founded. He will meet other of his counterparts, mostly from the left like himself, before leaving for Uruguay”.

“The second stage of ‘normalization’ is scheduled for January 30 in Brasilia, where he will receive a visit from the German Prime Minister, Olaf Scholz, the first European leader to meet him. Afterwards, Lula will go to Washington for a meeting with President Joe Biden”.

“’Everybody wants to talk to Brazil’ congratulated the head of state this week. Including the leaders of non-democratic regimes such as the Cuban Miguel Díaz-Canel and the Venezuelan Nicolás Maduro, with whom the metallurgical worker is expected to talk Tuesday in Argentina”.

The Brazilian international performance also drew the attention of Expresso, one of the main Portuguese weekly publications. Faced with the challenge of inflation in Brazil, the newspaper highlights the participation of Haddad and Marina in the Davos Forum.

“Lula wants to raise the inflation ceiling so as not to ‘crunch’ the economy. In order to win investment, Marina Silva and Fernando Haddad, unfold in contacts and interventions at the Davos Forum, one of the most important summits in the world economy”.