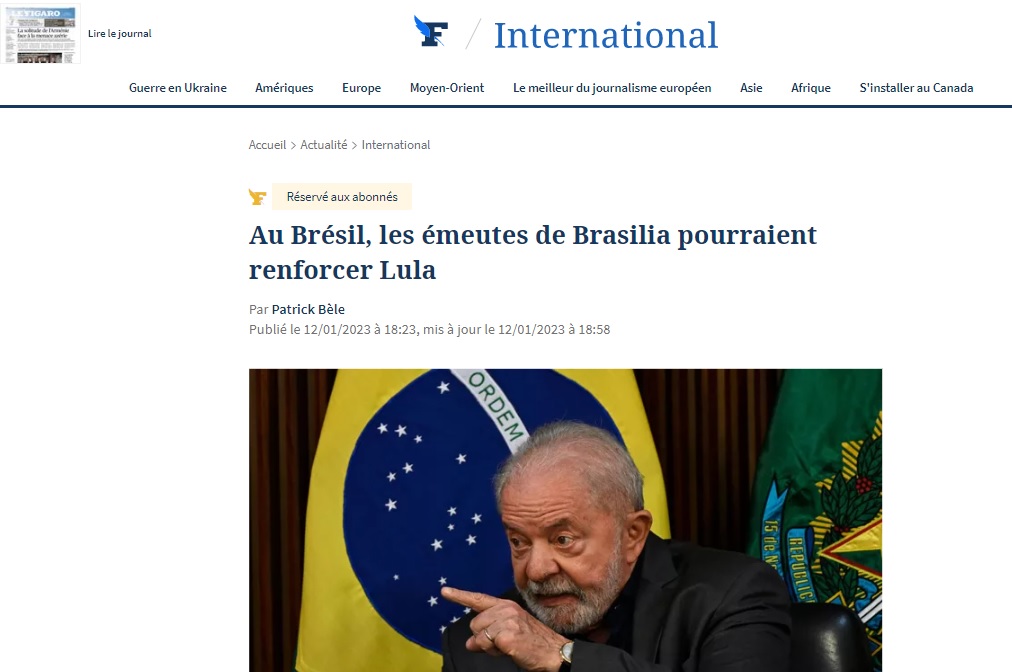 After the attempted coup d’état by Bolsonarists on the 8th of January, newspapers in Europe say that President Luiz Inácio Lula da Silva emerged stronger. “The rebellions in Brasilia could strengthen Lula”, says the French newspaper Le Figaro, in an article by Patrick Bèle.

“Thousands of supporters of the former president, who had been camping since November in front of the central army headquarters in Brasília, walked nine kilometers that separated them from the Supreme Court building, almost escorted by members of the police who were not very active, or sometimes showing their support to the protesters. In the end, the buildings were vandalized and numerous works of art were heavily damaged,” continues Le Figaro.

“These violent assaults against the symbols of Brazilian democracy gave the Lula government the opportunity to show its firmness, to begin a process of demilitarization of the civil service, to frame and punish representatives of the most extremist armed forces. The disturbance in Brasilia made it possible to persuade Lula’s opponents, announcing that the democratic path is the only option”, says the conservative French newspaper.

“Jair Bolsonaro published a video again contesting the election result, but he took it down in just a few minutes, understanding that the climate has changed. The images showed a prosecutor questioning Lula’s victory. The Brasilia rebellion turned the tables and probably reinforced (Lula’s) legitimacy. International support reinforced its credibility: from China to the United States, from Moscow to Berlin, from Paris to Caracas, messages of support multiplied”.

In the same country, Les Echos, a reference newspaper in the economic sector, makes a similar reading.

“Brazilians, bestialized, watched Sunday the spectacle of destruction of the spaces of power of their federal Republic. This blind violence vividly shocked public opinion, even in sectors of Bolsonaro voters. President Lula could benefit in the short term,” says the article “Lula at the head of democracy,” he says.

“Today, anti-Lula sentiment remains widespread in a large part of the population, but few Brazilians adhere to the strategy of chaos employed by radical Bolsonaristas. In the heat of the situation, more than 75% of the population criticized the operation, according to the Atlas Intel Institute, while only 10% approved. A few days later, another institute, Datafolha, stated that 93% of respondents were against the invasion and destruction of spaces of power and only 3% declared themselves in favor of this type of action”.

“Lula, in turn, could benefit from the explosive situation. In a strong gesture, he first gathered state governors, including those from the extreme right, at the crime scenes. In the presence of the presidents of Congress and the Supreme Court, he ensured that fascism would not pass”, observes Thierry Ogier, correspondent in Brazil.

“He, who had preached reconciliation at his inauguration, can now reaffirm his legitimacy and reach out to all those who reject the coup attempt. At the same time, his government, supported by the judiciary, immediately ordered a counteroffensive, which resulted in a wave of repression: more than 1,000 arrests, and an arrest warrant against the person responsible for security in Brasília, Anderson Torres,” says the journalist. .

“To avoid a new coup, the authorities are committed to nipping the insurrection in the bud. And to ensure that the climate of polarization does not degenerate into permanent political instability. This is the question of this crisis: in the short term, Lula’s position is strengthened, mainly thanks to the union with the legislative and judiciary powers. But if he fails to control the situation and unrest continues, it would contaminate his third term and weaken his government”, he analyzes.

In Spain, the newspaper La Vanguardia estimates that “the insurrection in Brasília reinforces Lula due to Bolsonaro’s weariness”. “The president marks territory by recalling the neutrality of the armed forces,” he says.

“Luiz Inácio Lula da Silva finds himself in a position of greater strength than that of January 1, when he took office after winning the elections by a historic minimum margin and with the majority right in Parliament and in the states”, he says.

“The democratic barbarity of the assault on the political heart of the country on Sunday and the failure of his eventual attempt at a military coup wore down Bolsonarism. And despite the mistakes made in order not to abort the revolt, Lula capitalizes on the united movement in defense of democracy, while repressing the insurgents, building bridges with his institutional rivals and trying to put the military in their place”, analyzes Anxo Lugilde.

“The certainty lies in that the operation went wrong and that politically it turns against Bolsonarism. And that is what benefits Lula, who continues to find it difficult, under pressure from the markets and with little margin to apply the distributive policies of previous mandates”, says the publication from Barcelona.

In Portugal, the newspaper Expresso emphasized the political decisions of the Brazilian president. “Lula da Silva came out of the crisis reinforced. Dismissing José Múcio, an experienced politician in the Defense portfolio, would be giving in to coup plotters or partisan interests.”