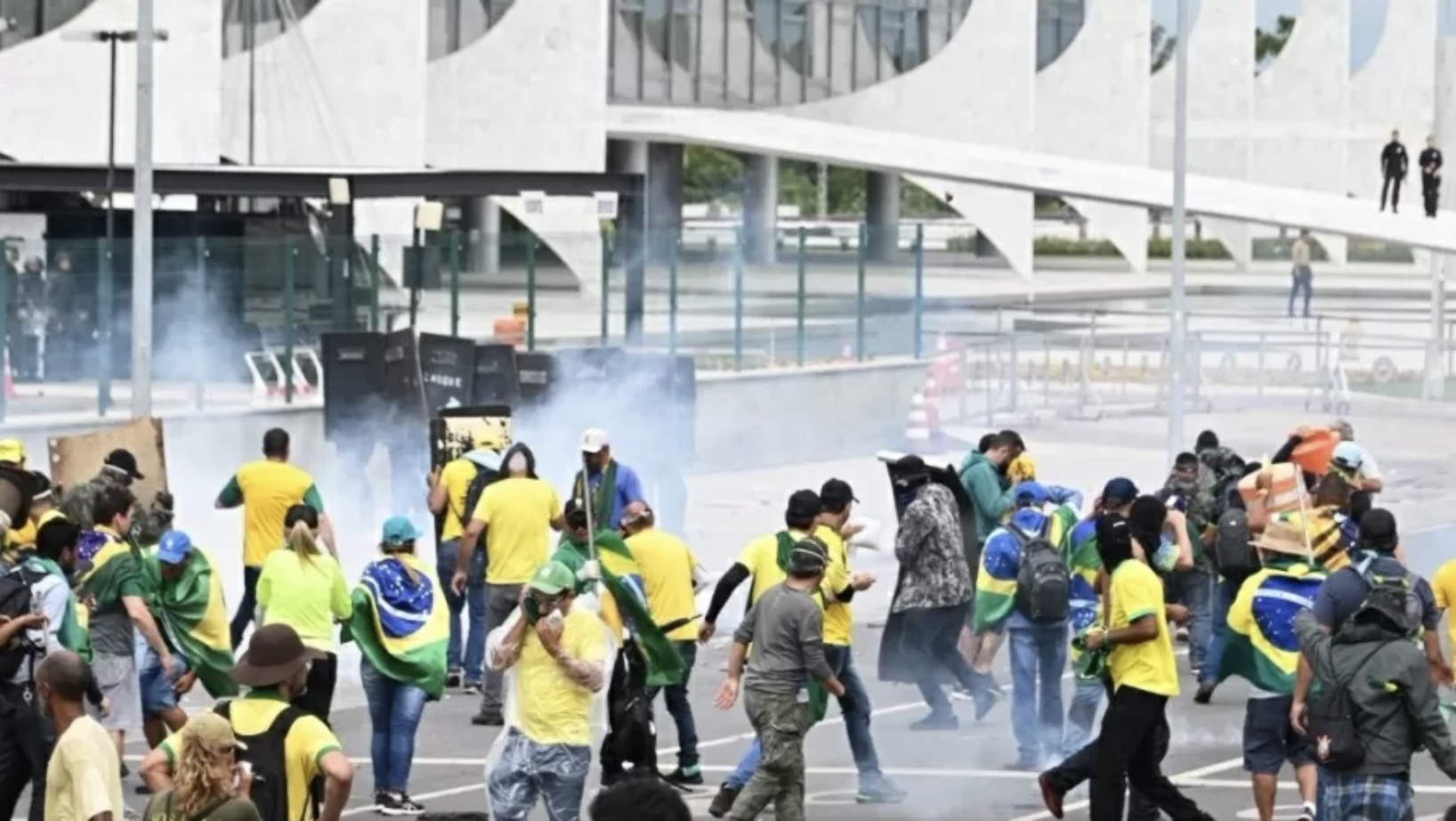 The article below was published in Brookings, described by the magazine The Economist as “perhaps the most prestigious think-tank in America”.

By Valerie Wirtschafter and Ted Piccone (translation by Edward Slim)

As thousands of protesters stormed the three main houses of state power in Brasilia on Sunday afternoon, the parallels between the January 6, 2021 attack on the US Capitol and events unfolding in Brazil’s capital were undeniable. , and widely discussed in the media.

In many ways, these comparisons were also entirely predictable: Former Brazilian President Jair Bolsonaro followed former US President Donald Trump’s playbook for much of his tenure. He rose to prominence as a combative right-wing populist, undaunted by his embrace of authoritarianism, spent his presidency complaining about “fake news” and made repeated and unsubstantiated allegations of fraud designed to undermine the integrity of Brazilian elections. Both countries also experienced a robust decline in the democratic rule of law during their respective terms.

Despite what now appeared to be an inevitable end, in the months after Bolsonaro’s defeat, observers in Brazil were cautiously hopeful that a peaceful transition of power might be possible without major incident – ​​and, for the most part, it was. After the election, Bolsonaro did not admit defeat, but authorized the presidential transition. Many Bolsonaro allies, elected in the same election, signaled their commitment to remain working in the “opposition”. And while pro-Bolsonaro protests across the country have been constant, political demonstrations in Brazil are quite common, and the security sector has successfully thwarted at least one particularly troubling incident.

Importantly, these demonstrations did not seem to characterize the top-down mobilization that characterized the aftermath of the 2020 US elections. In his last presidential speech, Bolsonaro urged his supporters to accept factual reality. He tried to find a way forward within the confines of the Constitution, he told them, but ultimately, “[nós] we live in a democracy or we don’t… Nobody wants an adventure”.

Amid heightened security and flanked by citizens representing the diversity of the Brazilian population, Luiz Inácio Lula da Silva was sworn in earlier this month as Brazil’s 39th president. Meanwhile, Bolsonaro was photographed in Florida, dining at Kentucky Fried Chicken and shopping at the Publix grocery chain (whose heiress was willing to contribute up to $3 million to the Jan. 6 protests). These viral images sparked jokes about the former president’s status as “Floria Man”[1] and raised questions about his decision to flee Brazil before losing immunity to various judicial investigations.

That a violent uprising by Bolsonaro supporters would eventually break out in Brasilia is not surprising, given two years of warning. But the fact that it happened on the date it did – after President Lula’s peaceful inauguration and Bolsonaro’s departure from Brazil – makes it more intriguing and distinct from the January 6 attack on the Capitol. While Brazil’s federal institutions have stood firm and united against anti-democratic forces, what is now clear is that authoritarianism has found a foothold in a country that 38 years ago emerged from a repressive military regime. While Bolsonaro’s direct role – if any – in Sunday’s attack remains unclear, the authoritarian values ​​that precipitated it apparently are ingrained among a subset of the population, perhaps even without the former president’s explicit support.

A DIFFERENT KIND OF INSURRECTION

As the attack unfolded in Brasilia, Congress was in recess and federal buildings were virtually empty. Once the transfer of power was concluded, the attack on the Federal Superior Court, the National Congress and the Planalto Palace seemed pointless and without clear organization. Although the rioters offered a vague rationale for occupying the buildings until the military intervened to annul the election, they seemed more concerned with looting the buildings. Videos and images of Bolsonaro supporters smashing windows, destroying artwork, looting government documents, setting carpets on fire and even defecating on tables circulated widely on social media, shared by the predators themselves. There were even concerns that Bolsonaro supporters had stolen the original copy of the 1988 Brazilian Constitution, which later turned out to be just a replica.

Unlike the United States, the actions of these bolsonaristas did not directly threaten the lives of those elected or seek to interrupt a constitutional process. But they represented a clear demonstration of his disdain for democracy, revealing the underlying authoritarian impulses that motivated at least some of the former president’s supporters. They also highlighted the clear power of disinformation to mobilize even a small fraction of radicals who, with the support of thousands of fanatical supporters, committed violent acts of destruction and destabilization.

The most alarming thing about the events in Brasilia was the total complacency of the local government and Public Security agents in the Federal District (DF). Unlike Washington, DC, the government of the Federal District—the seat of Brasilia—has the role of governing both the Federal District and the city of Brasilia, and security forces within the DF are responsible for protecting federal buildings. However, as the attack unfolded, Bolsonaro supporters encountered surprisingly limited resistance. Police officers – who are among the highest paid in Brazil – were caught talking to protesters and buying coconut water.

Before the invasion, the Brazilian Intelligence Agency (which had become highly politicized) had warned the DF government about possible “violent acts” due to an unusual number of chartered buses bound for the capital and messages on Telegram, WhatsApp and other online networks. calling for smaller protests across the country to occupy Brasilia. While there was a plan to contain the protesters, district authorities reportedly relaxed their containment strategy at the last minute, despite threats detected by intelligence. While the role of DF elected officials in these attacks is currently an open question, the now-fired secretary of public security and the ousted governor of the Federal District, both aligned with former President Bolsonaro, seem to have ignored these warnings.

Although the district government failed to rise to the challenge, Brazil’s federal institutions once again showed their resilience to anti-democratic attacks, despite their relative youth. Immediately after publicizing the invasions, Lula declared federal intervention in public security in the Federal District. With congressional approval, this allows the federal government to control public safety until the end of the month.

Alongside other federal forces, the military eventually intervened, drawing applause from Bolsonaro supporters, but did so only to evict protesters from federal buildings (it is important to note that several military officers would have participated in the vandalism, showing clear internal divisions between the forces armed forces of Brazil). The Federal Supreme Court also quickly removed the DF governor for 90 days, pending an investigation into his “painful absence” during the attack. Somewhere between 200 and 400 people were immediately arrested, and less than 24 hours later, the federal government had detained more than 1,500 people for questioning about involvement in the attempted coup, with more arrests underway.

Investigations have already begun to identify individuals who destroyed federal buildings, as well as discover funding networks that helped charter buses from all over Brazil. In addition, the investigations will raise the participation of public servants. Precedents make it feasible to persecute politicians, as Lula himself experienced after leaving the presidency in 2011. in repudiation of coup acts”. This quick action is due in part to the fact that Bolsonaro is no longer in power and, consequently, does not control the levers of the federal government. It could also be due to the fact that threats of a possible January 6-style event were long anticipated, mainly due to Bolsonaro’s warning that his future held one of three options: “be arrested, killed or victory”. .

THE PATH TO RECOVERY

Despite widespread public disapproval of the attack earlier this week and a wave of pro-democracy demonstrations following the riot, it would be unwise to celebrate the failed coup attempt as a death knell for Bolsonarism or anti-democratic forces in Brazil. After all, both found solid foundations even without the explicit support of the former president. While recent presidential elections may have revitalized Brazil’s shaky democracy, Bolsonaro’s presidency has done serious damage by undermining the perceived legitimacy of democratic institutions and electoral processes.

As the Brazilian people move forward after the unprecedented attack, the US experience offers a less-than-perfect blueprint to follow, or an opportunity to chart a different course. While the US Department of Justice has continued to successfully prosecute the January 6 insurgents, so far the upper echelons of Trump’s circle have evaded accountability and remain a powerful force in the new US Congress. The events of January 8, 2023, somehow already put Brazil on its own, different path.

However, some clear similarities remain. Hyperpartisanship, erosion of trust in traditional media, mistrust in elections, and narrow wins by Biden and Lula pose clear challenges for both presidents. With Lula’s visit to Biden in Washington, scheduled for early February, and with the two leaders reaffirming their commitment to a “permanent dialogue to strengthen democracy”, Brazil and the United States have an important – and perhaps existential – opportunity to collaboration.

[1] “Florida Man” is an internet meme first popularized in 2013 that refers to an alleged prevalence of men performing irrational, stupid, or absurd actions in the US state of Florida. Internet users commonly post links to news stories and articles about unusual or strange crimes and other events taking place in Florida, with the headlines of stories usually beginning with “Florida Man…” followed by the main event of the story.